Main Causes of Rollover Accidents and How to Avoid Them 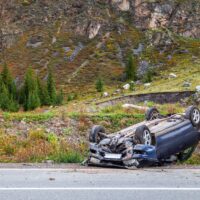 In certain conditions, rollover accidents involving trucks and commercial vehicles are dangerous and even fatal. Data from the Insurance Institute for Highway Safety details that 48% of fatal large truck accidents occurred in crashes involving rollover accidents. The figure is significantly less yet still concerning, 22%, when it comes to fatalities of car occupants involved in rollovers.

Let’s take a look at the main causes of rollover accidents involving 18-wheelers as well as what truckers and everyday drivers can do to help reduce these types of accidents.

An overwhelming majority of truck rollover accidents occur because of driver error. Driver error takes on many forms and can include the following:

18-wheeler semi-trucks and other commercial vehicles are top-heavy, resulting in a higher center of gravity due to their stacked loads. This top-heaviness can be dangerous because it increases a vehicle’s chances of tipping over or losing balance under certain conditions. If a truck driver’s cargo is not securely loaded on, this could cause a shifting center of gravity which may throw a driver off in certain conditions. An improperly secured load can also lead to a rollover if the load becomes loose during transport.

Speeding above the recommended posted speed limit or driving too fast for conditions can be another factor for rollovers to occur. Heavier vehicles like trucks and commercial transports take a much longer time to slow down and come to a complete stop than smaller vehicles. If a truck is moving at excessive speeds, trying to suddenly slow down, stop or turn can cause a vehicle to lose balance and tip over. Trucks that are moving at high speeds can also be prone to rolling over if they hit a pothole or other obstruction.

Curves, ramps, and exits are other variables that contribute to commercial vehicle rollovers. If a driver is going too fast on a curve, ramp, or exit, they could lose control much more quickly. Poor weather conditions while exiting or merging from one roadway to another can cause a rollover accident as well.

Driving in inclement weather is hazardous for all drivers, especially truckers and those operating commercial vehicles. Because trucks are slow to stop, drivers might not have enough time to respond to a road obstruction if they are unable to see in poor road conditions. Many semi-truck rollover accidents occur during inclement rain and snowfall due to less traction between the tires and the pavement. When this happens, trucks have a higher rate of skidding across the road and potentially losing their balance.

Rollover accidents involving 18-wheelers can also occur through maintenance issues with the truck itself. One of the main features to consider is a poorly maintained brake or suspension system. Trucks have a mass anywhere from 20 to 50 times greater than that of a standard four-wheel vehicle. A truck driving at high speeds has a greater momentum, making it harder for it to stop the way a smaller vehicle would. If an 18-wheeler is also equipped with poor brake or suspension systems, the chances of a rollover accident are heightened.

How to Stay Safe on the Road: Reducing 18-Wheeler Rollovers

Because many semi-truck rollover accidents occur due to driver error, trucking companies must take great care when providing driver training. Not doing so can leave them open to being liable in the event of an accident occurring with one of their trucks and/or drivers.

Addressing driver distractions is also another way to reduce avoidable accidents altogether. Avoiding cell phone usage, texting, and eating while driving are all ways truckers can help to keep their attention on the road.

Drivers in four-wheeled vehicles can also do their part to prevent unnecessary semi-truck collisions. It is always best practice to give trucks plenty of space when they are on the highway. Never cut in front of a truck or slow down once you merge in front of one as this can throw off a truck driver’s ability to remain in control of their truck.

Conditions for a Rollover Truck Accident

Much like an SUV, 18-wheelers and other large commercial vehicles have a higher chance of tipping over and causing a rollover accident. Despite all the safety and preventive measures in place to help reduce collisions with semi-trucks, injuries occur nonetheless. If you or someone you love has been injured due to a semi-truck rollover accident or collision, you may be entitled to compensation for your suffering. Reach out to the Morris Law Firm today to discuss your case with an experienced and dedicated southern California truck accident injury attorney.