Who is At-Fault in a Chain-Reaction Car Accident? 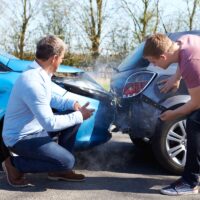 Chain-reaction car crashes can be extremely dangerous. With every new vehicle added to the wreck, the chances of a serious injury or fatality rise even higher. Chain-reaction crashes can take over entire freeways, stopping traffic and creating hazards for people miles down the line. Chain-reaction accidents are rarely straightforward, involving a combination of several events and negligent behaviors. It can be difficult to determine who, if anyone, is liable for a particular motorist’s injuries. Continue reading to learn about liability in a chain-reaction car crash, and call a zealous Los Angeles car accident lawyer if you’ve been hurt in a car crash in Southern California.

Chain-reaction crashes or multi-car crashes are accidents that involve three or more vehicles. Typically, these accidents occur by way of a “chain reaction”–that is, two cars crash initially, and then one or more cars subsequently crash into the wreckage created by the initial accident. There may be a series of several additional accidents. Often these take the form of a series of rear-end collisions; a front vehicle stops suddenly due to a hazard, a second car rear-ends the first, which causes the first car to be shoved forward and rear-end a third.

Depending upon the nature of the crash and the actions of each party, one or more parties may be at fault. If Driver 1 stops suddenly, tailgating Driver 2 crashes into Driver 1, causing Driver 1 to crash into the rear-end of Driver 3 (2>1>3), Driver 2 likely is to blame (just like other rear-end collisions). However, if Driver B rear-ends Driver A, and then Driver C rear-ends Driver B (C>B>A), the situation can quickly become much more complex.

In many cases, the driver who caused the first impact will be to blame for the entire accident. However, other parties may be partially liable as well. To figure out who all is liable, look to who acted negligently at any point along the way and whether that negligence contributed to the pileup. Negligent behavior that might cause or exacerbate a chain-reaction crash can include:

When multiple cars are involved in a pileup, there’s every chance that more than one person acted negligently along the way. One set of cars may have crashed and caused an initial hazard, but then a truck driver may be on the same route and operating without sleep, leading to a jackknife wreck and even more cars getting involved. California law accounts for the fact that multiple parties can be partially liable for an incident.

Under California’s “joint and several liability” rules, when multiple parties share fault for an accident, each party may be held liable for their portion of fault. If, for example, Driver A suffered $10,000 in injuries caused by the negligence of Drivers B and C, and a jury determines that B and C are each 50% at fault, then Driver A would recover $5,000 from each of Driver A and B. Driver A could also go after either driver for the full amount of economic damages that Driver A suffered, but each negligent driver is only responsible for their share of fault when it comes to noneconomic (pain and suffering) damages.

If you were injured in a car accident in Los Angeles, you need experienced, effective legal help to protect your rights. Reach out to a California auto accident attorney at Morris Law Firm to find out if you have a claim for damages. Morris Law Firm will give you a personalized evaluation and help you figure out your legal rights and next steps. Call us today at 747-283-1144 for a fast response or fill out our online contact form to schedule your free consultation.